Today was definitely colder than when I took a picture of the same view a week ago!  I reckon that is a sprinkling of snow on the beds, but Chris thinks it is just a heavy frost.  Either way, we didn’t let it stop us getting on in the garden.

Chris pruned the last of the fruit trees.

That was a bit of a cold job today, but he was really pleased to get it done.  The ones that he was doing today were two of our espaliers which had started to send up lots of shoots which meant that last autumn it was a bit of a stretch to reach all of the fruit! 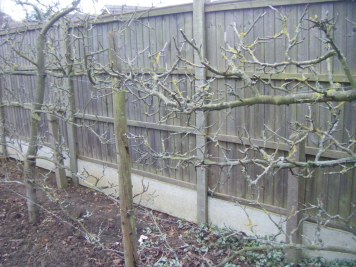 They look a lot more manageable now; there are plenty of fruiting spurs so fingers crossed for a good crop next year.  In the foreground is the Jonagold which has never cropped heavily.  Perhaps because it is in the only part of the garden where there is a tendency for the soil to become waterlogged.

Because there were only 11 cloves in the Red Duke garlic that I planted last week I sent off for some more.  I thought that I would try a different variety to compare with Red Duke so ordered Solent Wight.  This time there were over thirty cloves in the same weight of garlic.  I planted those today as well as the last few broadbeans.  I had to order more of those seeds as well as I didn’t have quite enough.  I am hoping that in only a few weeks I will be able to plant both the garlic and broadbeans into the plot.  My Dad planted his broadbeans in the autumn and they are aparantly already a foot high!  It will be interesting to see how much sooner he is able to start picking his broadbeans than we are.